Republicans appear to be making abortion a central political issue in the runup to the 2020 elections. While abortion policy is a salient issue in nearly every state and federal election, I believe that Republicans are pursuing a new tactic in this election cycle. Republicans in Congress and various state legislatures including Virginia and Wisconsin have introduced legislation requiring doctors to save the lives of babies who are inadvertently born during the course of an abortion procedure. Despite the fact that this legislation apparently describes a situation which does not exist, President Trump has lent his vocal and graphic support to these efforts.1 In the rest of this post, I’ll discuss the political strategy behind these bills.2

Most people know what they think about abortion. Polls routinely find just 5% or fewer are unwilling or unable to give an opinion.3 And if it’s framed as pro-life vs. pro-choice binary, the population seems evenly and oppositely divided.

In reality, views of abortion are on a continuum. At one extreme is the bill proposed by Texas legislator Tony Tinderholt which would allow for women who have abortions to be executed for first degree murder.4 At the other extreme are the views of people like bioethicist Peter Singer who finds infanticide acceptable as he believes newborns lack “rationality, automony, and self-consciousness.”5 Nearly everyone lies somewhere between these two poles. (The range of options presented by American politicians clearly skews right. After all, Tinderholt represents a state legislative district and no elected officials that I’m aware of advocate infanticide.6)

Wisconsin was the state decided by the smallest margin in 2016, and there is a very good chance it will be just as divided in 2020. Its views on abortion closely mirror the nation as a whole, so it makes a good case study. Here are the attitudes of Wisconsin registered voters in 2018, according to the Marquette Law Poll. 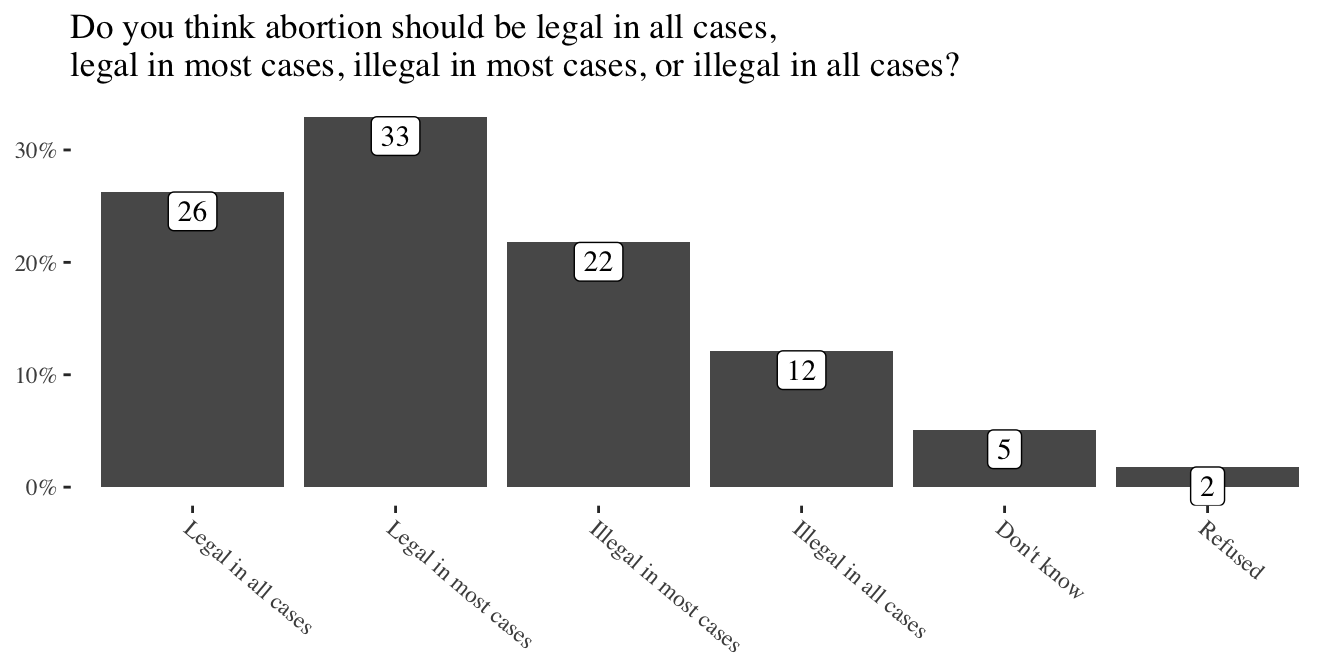 You can spin these numbers in several directions. A majority think abortion should have minimal restrictions and Two-thirds of Wisconsinites think abortion should have legal restrictions are both technically accurate interpretations of this data. But clearly there is not majority support for either of the “extreme” positions. The parties have to assemble their working majority by drawing from the middle categories.

Usually, the dynamics of the Republican party primary force the winning candidate toward the right. Because every candidate on the debate stage is (almost always) pro-life, the debate becomes a contest to prove one’s anti-abortion bona fides. At stake is the support of the powerful strongly pro-life faction of Republican primary voters. In appealing to them, however, the Republican candidate risks alienating the large share of voters who hold more ambivalent positions.

Neither of these tactics helps Republicans expand their coalition of voters beyond the third of the American electorate who actually support strict anti-abortion policies. This leaves Republican strategists in a bind. If they moderate on abortion policies they risk being primaried at worst or simply losing the enthusiasm of pro-life voters at best. The Constitution Party already challenges Republicans by describing itself as the “only 100% pro-life party.”

Bill Clinton was surely aware of this dynamic when he characterized his administration’s position on abortion as ensuring that is was “safe, legal, and rare.”8 I don’t know how many Americans were positively enthusiastic about this formulation, but it staked out a consensus position that a solid majority of voters could at least accept. When a quarter of Americans support unrestricted abortion access and another third support only limited restrictions, a strictly pro-life Republican faces an uphill battle.

That’s why, I believe, Republicans are introducing these new “accidental birth” (or whatever you want to call it) laws. They can’t moderate for fear of losing their base, so the policy positions they represent are perpetually stuck in the minority. Instead, they are trying to use these new bills to paint Democrats as being on the extreme left of the abortion issue. I believe this tactic is designed for two purposes.